This is a graph from the Government's 2011 Budget Report. It shows their estimates of the scale of private sector debt - about six times the level of public debt. The top lighter band is the financial sector. Black is household which is about 80% mortgages, and dark-green is non-financial business. 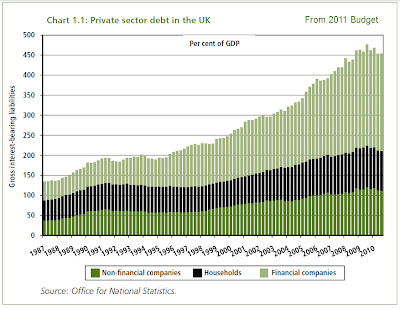 Curiously neither the 2011 or the 2012 Government Budget have any measures for dealing with this problem. In the 2012 Budget there is barely any mention of private debt. I fact public debt is talked up as the problem. And recent days have seen government minsters blaming this on Labour. In particular the Government's  Budget is silent on the possibility of this massively over-indebted sector borrowing even more money for investment. I cannot recall any government minister mentioning private debt, and I cannot recall any journalist asking sustained questions about it. Some questions came up during Steve Keen's recent book promotion tour, but have died down again.

Many commentators are now saying that the Govt are using the chaos of the ongoing depression to shrink the state for ideological reasons. For example, in an interview with the Guardian, Dr Gabriel Scally formerly of the Department of Health says:


"At the end of the war this country was hugely indebted but within a couple of years had free healthcare and free education for everyone – what an achievement! This government is putting a huge price on education, especially young people seeking to go to university, and is in the process of dismantling the NHS."


I think this is very likely to be the case. So not only is the government ignoring the primary cause of the depression, its austerity program is doing long term damage and preventing recovery, but they are dismantling or seriously weakening the social institutions that we need to help us get through this.

If you sat down to right a farce about a myopic and incompetent government, you could not do better than the real thing we have now. The UK will be a long time recovering, and we have not seen the worst of it yet.
Posted by Jayarava at 22:22 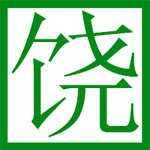